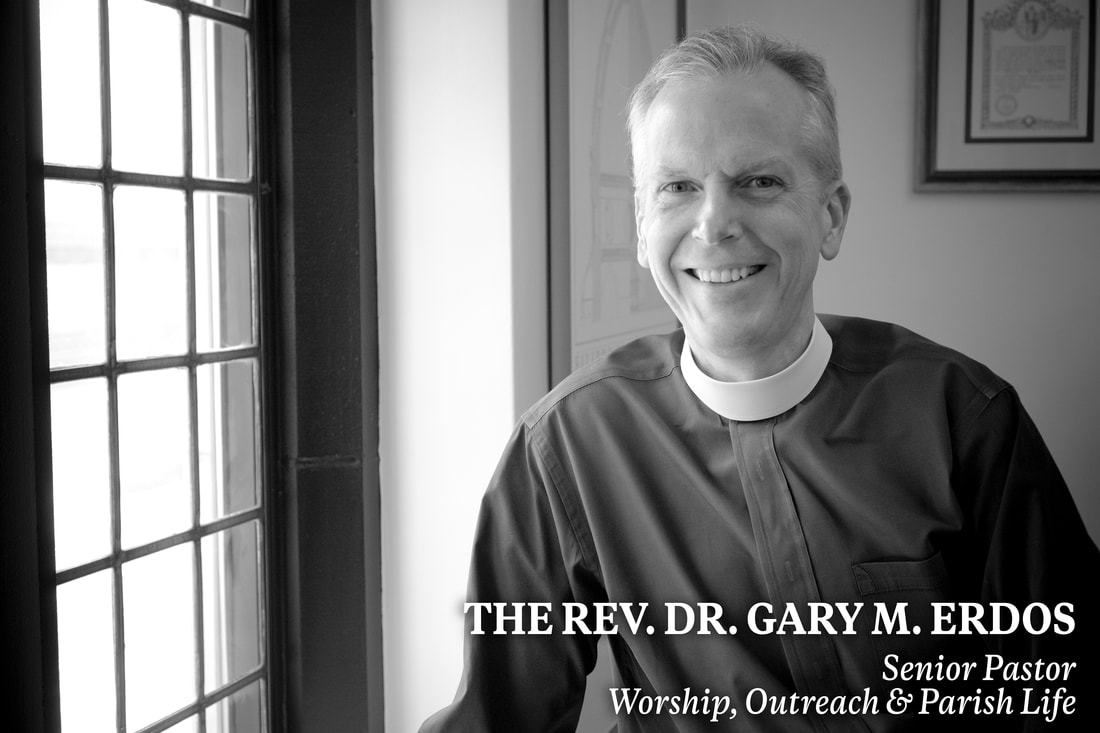 Pastor Erdos grew up in Butler, Pennsylvania, a town forty minutes northwest of Pittsburgh. After attending Grove City College, Grove City, Pennsylvania and graduating with degrees in Economics and Finance and a minor in Philosophy, he attended Trinity Lutheran Seminary in Columbus, Ohio. In his time at Trinity he spent a year at the Boston Theological Consortium and a year on internship at Faith Lutheran Church in Arlington, Virginia. While in seminary, he had the opportunity to work with Walter Bouman on the Concordat of Agreement with the Episcopal Church, one of the documents leading to the full-communion agreement between the ELCA and Episcopal Church.

After graduation, Pastor Erdos served parishes in South Park, Mt Lebanon and Freeport Pennsylvania – all near Pittsburgh and then St Mark Lutheran Church in Yorktown, Virginia. In this time, he participated and taught courses at the College of Preachers of Washington Cathedral and became involved in Ignatian spirituality, leading and participating in retreats related to Jesuit ideas. While at St Mark, Pastor Erdos and the parish of St Mark were involved in Diana Butler Bass’s project studying the revitalization of mainline congregations. The ministry of St Mark was one of the parishes highlighted in Bass’s book, Christianity for the Rest of Us.

Pastor Erdos is married to Luanne Erdos, a marketing and business teacher at Concordia Lutheran High School where she also heads the Honors Academy. Luanne has also taught in New Hampshire, Ohio, Pittsburgh and Virginia where she has headed a number of popular marketing programs for high school students. Their older son Andrew lives in Northern Virginia and younger son Peter is a student at St. Mary's College in Maryland. 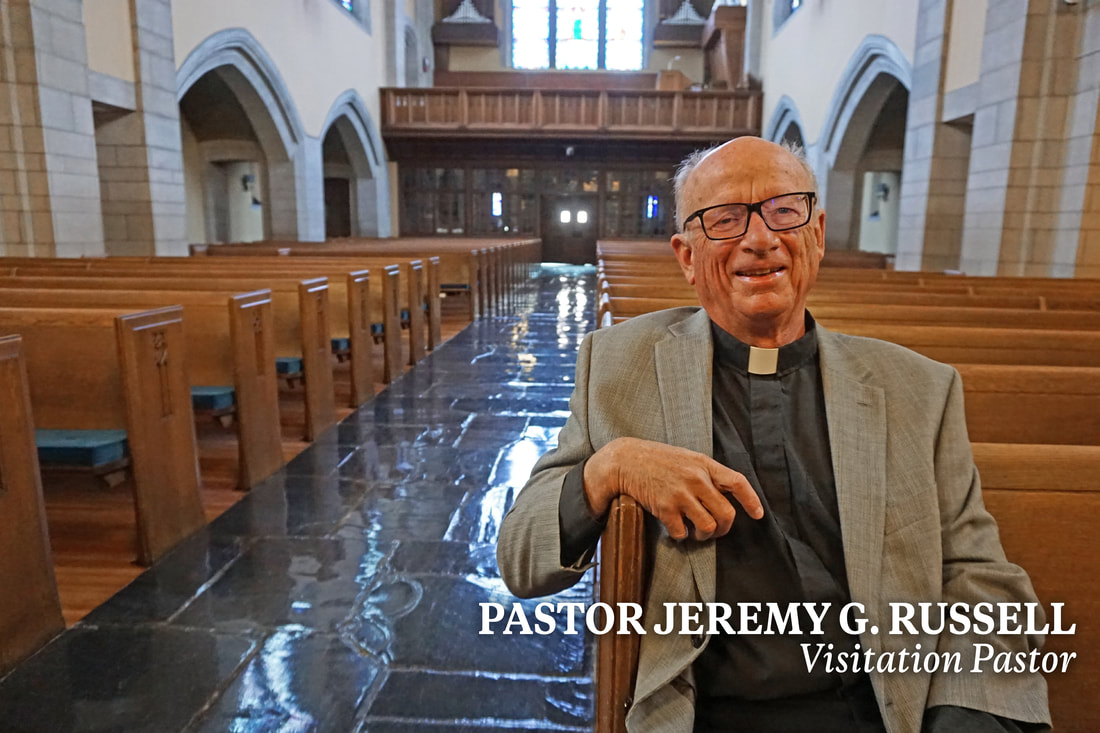 Born into a Navy family, Pastor Russell did not have a “normal” childhood. He lived in many places including a three-year period in Hong Kong where he attended British schools in what would have been his fifth, sixth, and seventh grades. High school proved to be three different schools in as many places: Newport, Rhode Island; Hyattsville, Maryland; and Chester, Virginia. Determined to stay in one place, he attended Otterbein College, Westerville, Ohio, graduating with a major in history and a minor in political science.

He married Donna Simonetti while they were still at Otterbein. After graduation, he worked for the Department of the Army as a civilian employee for four years. As he said, his buried desire to be a parish pastor was realized when God found him hiding in New Jersey! He attended Lutheran Theological Seminary, which is now Trinity, in Columbus, Ohio, while Donna and their children stayed with her mother in Massachusetts (no housing at the seminary the first year). The family joined him his second year.

His first church was in Ohio, Illinois (yes, the town’s name is Ohio!). He served another church in Illinois before moving to Indiana in 1988. He has served St. John’s Lake Township and Lutherans in Mission Parish of St. Mark’s, Auburn, Zion 16, Corunna, and St. Mark’s, Butler, before being called to Emanuel, Lawrenceburg, Indiana. He and Donna were in a long-distance marriage while he served Emanuel for 13 years. He retired from Emanuel and came home. They made Trinity their church family.

Before coming to Trinity as Visitation Pastor, he served St. Mark’s, Monroeville, and then Emmanuel, LaOtto, as an interim pastor. He brings to this position 45 years of service as a parish pastor and over 400 hours of Clinical Pastoral Education earned at Lutheran Hospital, Fort Wayne.

Pastor Jeremy and Donna have two children, Erik and Michelle, and five grandchildren. Erik and his wife and three children live in Woodburn, and Michelle and one son live in Angola. Her eldest is married and living in Columbus, Ohio. Donna is a retired music teacher and has been a member of Trinity’s choir. She has a master’s in bassoon performance. She enjoys working part-time helping the music program at East Noble High School, Kendallville. She said that one of the reasons they joined the Trinity family was its music program. 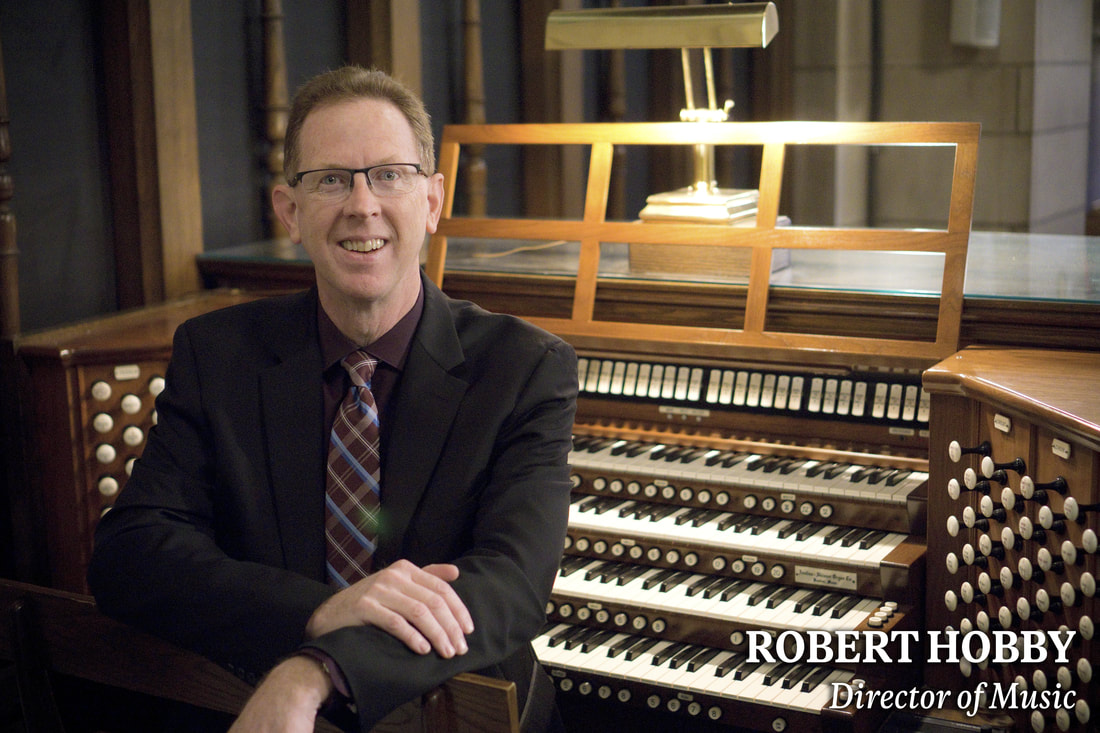 Robert A. Hobby is Director of Music at Trinity English Lutheran Church, Fort Wayne, Indiana, where his responsibilities include playing for many of the worship services, overseeing the graded music and arts program, leading youth choir and adult fine arts trips, and managing the concerts that the church offers. Bob received his Bachelor's degree in church music from Wittenberg University in 1985 and a Master's degree in organ performance from the University of Notre Dame in 1987; an honorary Doctor of Music degree was conferred on him by Wittenberg University at its commencement in 2014.  Over 250 of Bob's compositions, including 2 large choral/orchestral works, are in print with 8 publishers. His compositions have been heard nationally on TV and syndicated radio programs and in concert and worship venues around the world, and his musical contributions currently appear in 4 major denominational hymnals.  Bob also maintains an active schedule as clinician and performer throughout the United States and is a member of various professional music organizations, in some of which he has held leadership positions. Bob and his wife, Jennifer, are the proud parents of three daughters: Hannah, Lydia, and Elizabeth.   ​ 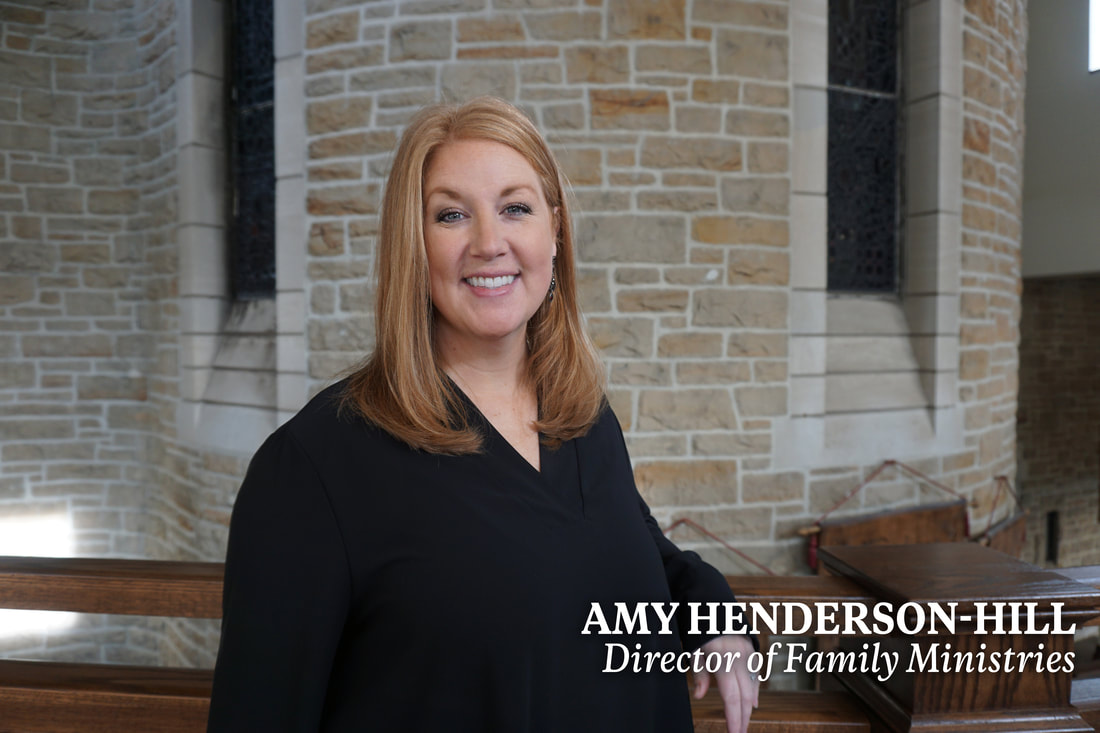 Amy grew up in Fort Wayne and loves this thriving, evolving city. Amy attended Wittenberg University in Springfield, Ohio, and graduated with a Bachelor of Arts degree in Communication. While at Witt, she worked as Tour Manager and President of the Wittenberg Choir while discovering her interests were (and still are!) constantly evolving.

Having a love for outdoor spaces, Amy worked at camps for years, which ignited her enthusiasm for working with youth as they foster creativity and critical thinking in all matters, especially in the exploration of who God is and how God is working in their lives and communities. She persistently seeks opportunities for connection and service.

Amy and her husband, Tim, are parents to Henry and Milo, in addition to their heavenly son, Hugo. Amy enjoys native-perennial gardening, hiking, learning, adventuring, and sharing a table with friends and strangers alike.​​ 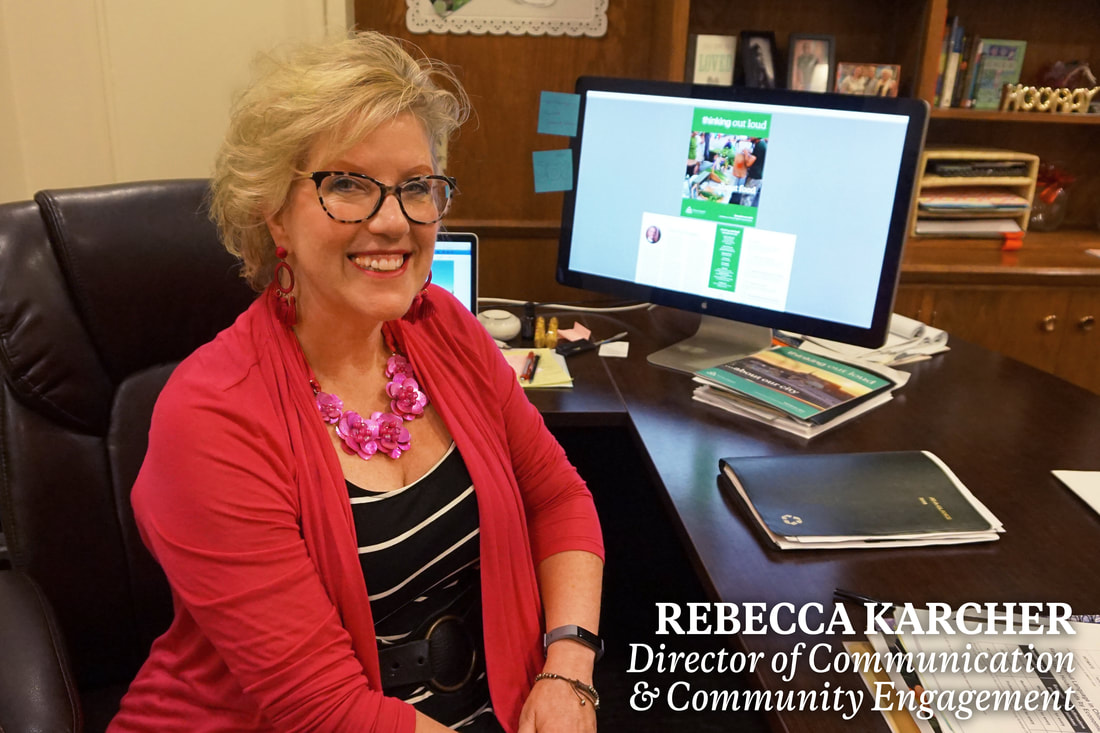 Rebecca has the fortunate role of helping Trinity find its place in the downtown neighborhood. Rebecca is always looking for ways to connect Trinity members to one another and to the opportunities present in our larger community.  Rebecca’s career has included two different stints with Fort Wayne City government, as well as public relations work with advertising agencies.  She is a Kansas City native who came to our city to work as the executive producer of news at WPTA-TV and ended up making Fort Wayne her home. She and her husband Rich (a local attorney), are very proud of their Illinois College assistant Track Coach son, Justin Fisher. Both Justin and his father, Dave Fisher, are also members of Trinity English. In her spare time, Rebecca enjoys acting in community theater, practicing yoga, and being involved with different groups to support broader inclusion and participation for everyone who wants to make a difference in our community. 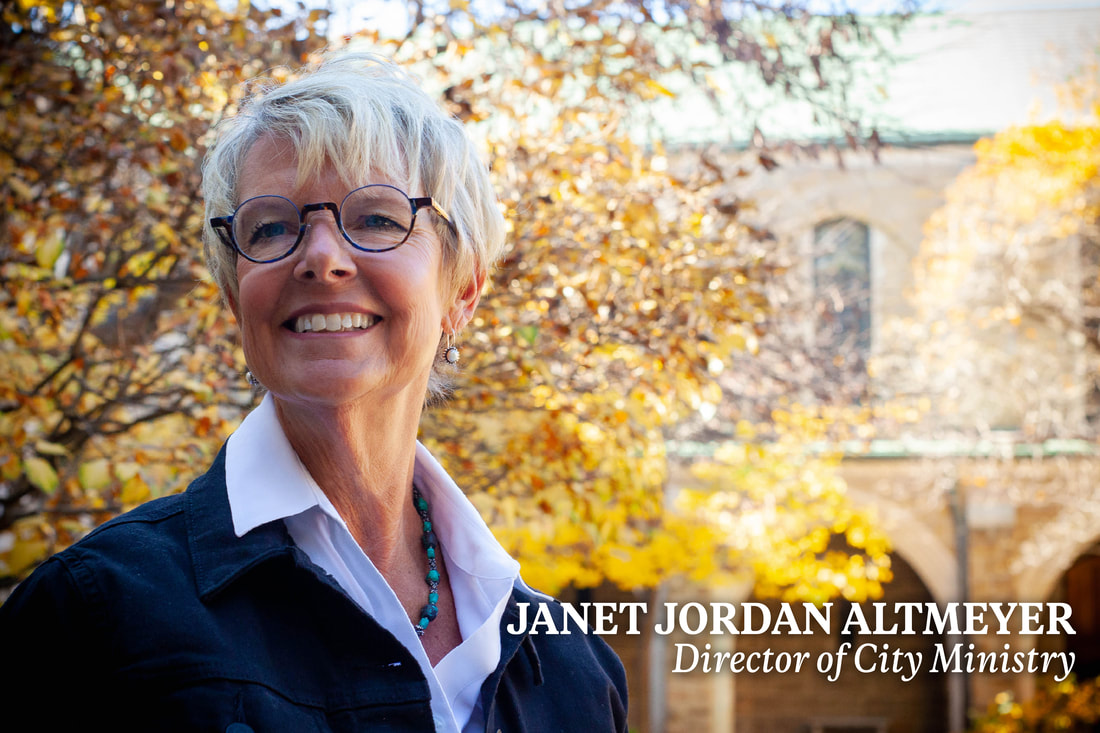 As the Director of City Ministry Janet works closely with the pastors and staff of Trinity English Lutheran Church, volunteers, and community partners to build meaningful and supportive relationships. Trinity’s City Ministry volunteers are equipped by using The Rev. Dr. Craig Rennebohm’s Companionship Model, designed to reduce stigma and create a vibrant and welcoming community. Janet is also a trained grief facilitator, and mental health advocate. She is an honors graduate of Vanderbilt University and The University of Saint Francis and was a certified educational therapist for over twenty-five years. In 2009 Janet joined the staff at Trinity English Lutheran Church. She is an amateur landscape designer, animal lover, reader, and story enthusiast. Along with being grateful for her family, Janet is the Founder/Executive Director of PAWS, Inc. (Pets Assisting Well-Being and Success, Inc.,) an animal-assisted therapy and research organization. 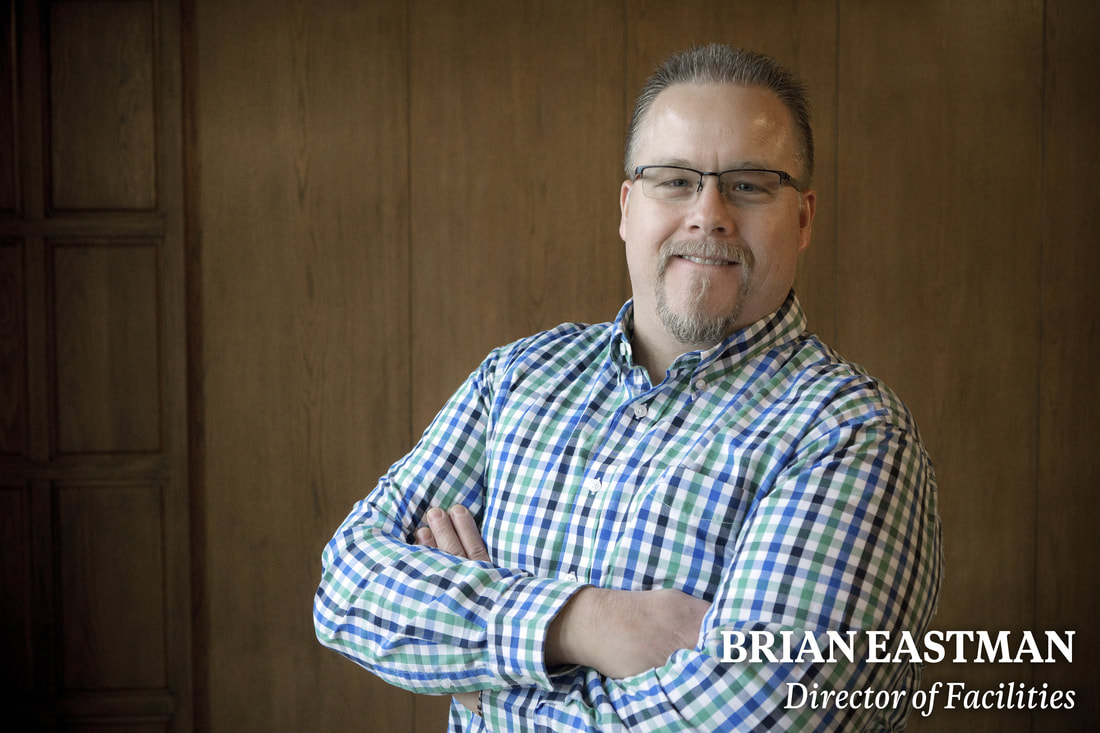 Brian Eastman is a lifetime resident of the Fort Wayne area and joined the Trinity English Ministry Staff in March of 2015 as Director of Facilities. Brian came to Trinity English from the City of Fort Wayne's Division of Community Development where he worked as a Community Development Project Administrator, Program Manager and Construction Specialist. Brian is a licensed Building Contractor, licensed Insurance Adjuster and a former construction company owner with property maintenance and management experience. Brian and his wife, Melissa, keep busy with their five children and enjoy outdoor activities. Brian is excited with the opportunity to help maintain the historic facilities and be part of the ministry of Trinity English. 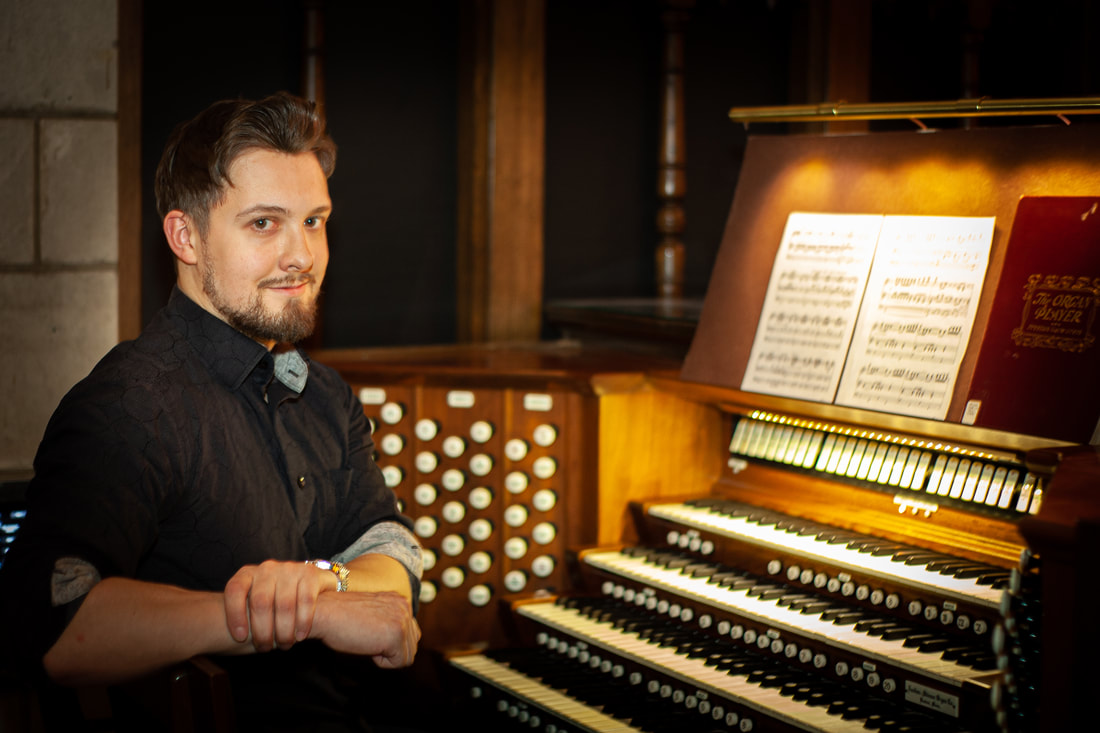 Since a young age, Evan has shown a proclivity towards music. Beginning piano lessons at the age of six, he grew up listening to and performing music both in the church and out. Evan began organ lessons as a teenager and served as organist in churches in the Duluth, MN area during highschool and played several solo recitals in that region. While in college, Evan was an organist at several churches in the Northfield, MN area. He graduated with a Bachelors of Music in Church Music from St Olaf College in 2019 began working at Trinity as Associate Director of Music shortly thereafter. One of his favorite parts of the position is spending time practicing on one of Trinity's three pipe organs working on new repertoire for upcoming services and concerts. Evan enjoys a wide variety of music, sacred, secular, and in-between; he loves music history and theory as well as discovering new pieces. Have a question about music? Evan would love to hear it. 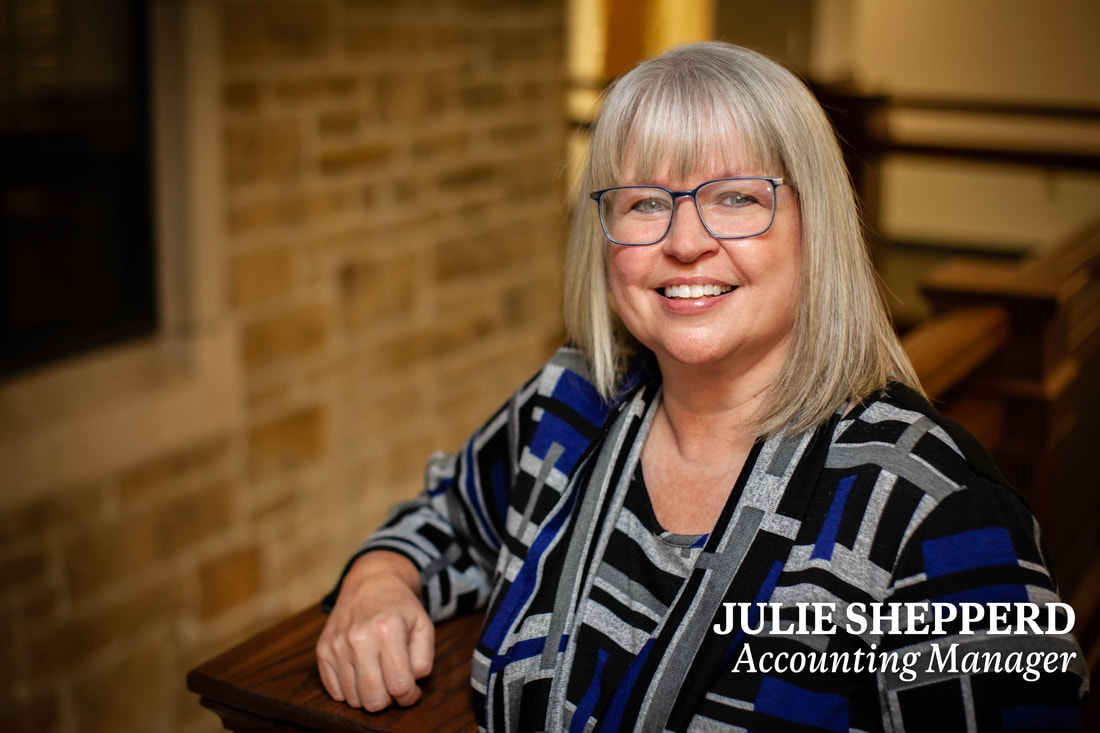 Julie Shepperd joined the TELC Staff in June 2018 as the Accounting Manager. Julie is a graduate of Indiana University, with a Bachelor of Science degree in Business Management. She previously worked for Lincoln Financial, Fort Wayne Children’s Zoo and Katz Sapper Miller, as an accountant. She is from Decatur and has 3 adult children and 8 grandchildren. She loves to spend time with them, whenever she can. 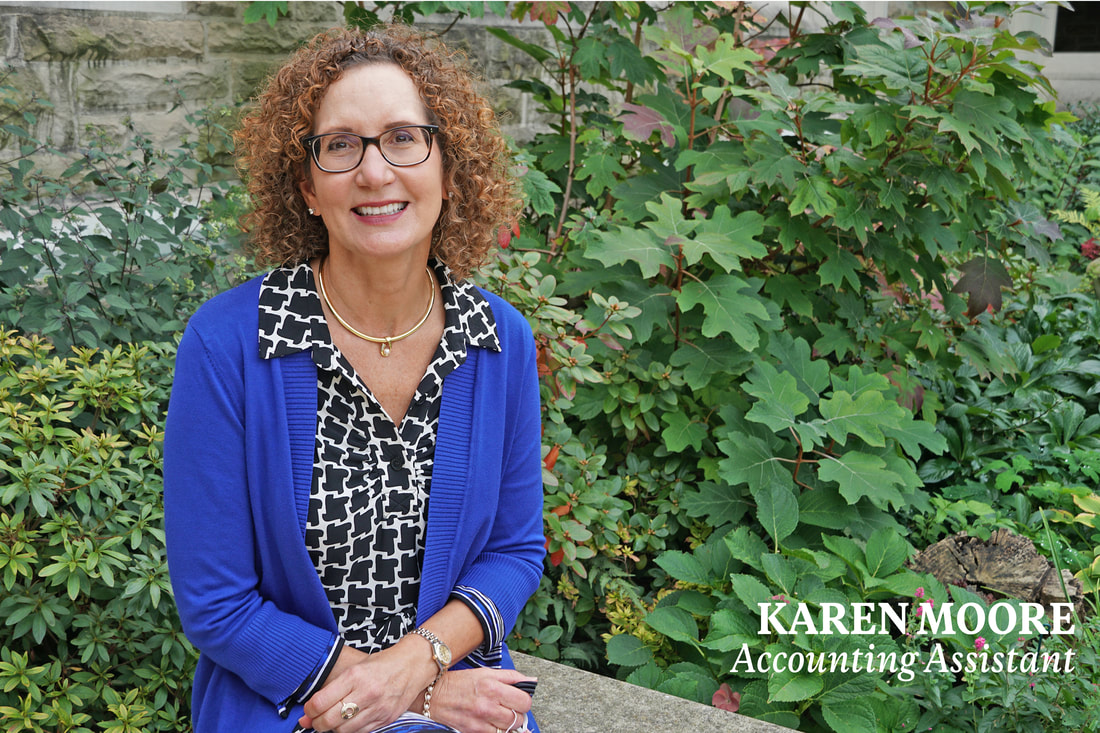 Karen grew up in Muncie, IN but moved to Fort Wayne in 1993. She graduated from Ball State University with a Bachelor of Science degree in Accounting in 1983 and an MBA in 1987. She passed the CPA exam in 1985. Karen joined TELC as Accounting Assistant on a part-time basis in October 2019. She was previously with Employers Administrative Services of Indiana. Karen loves traveling with her partner, Jim Wehrenberg, playing tennis, bicycling and reading. 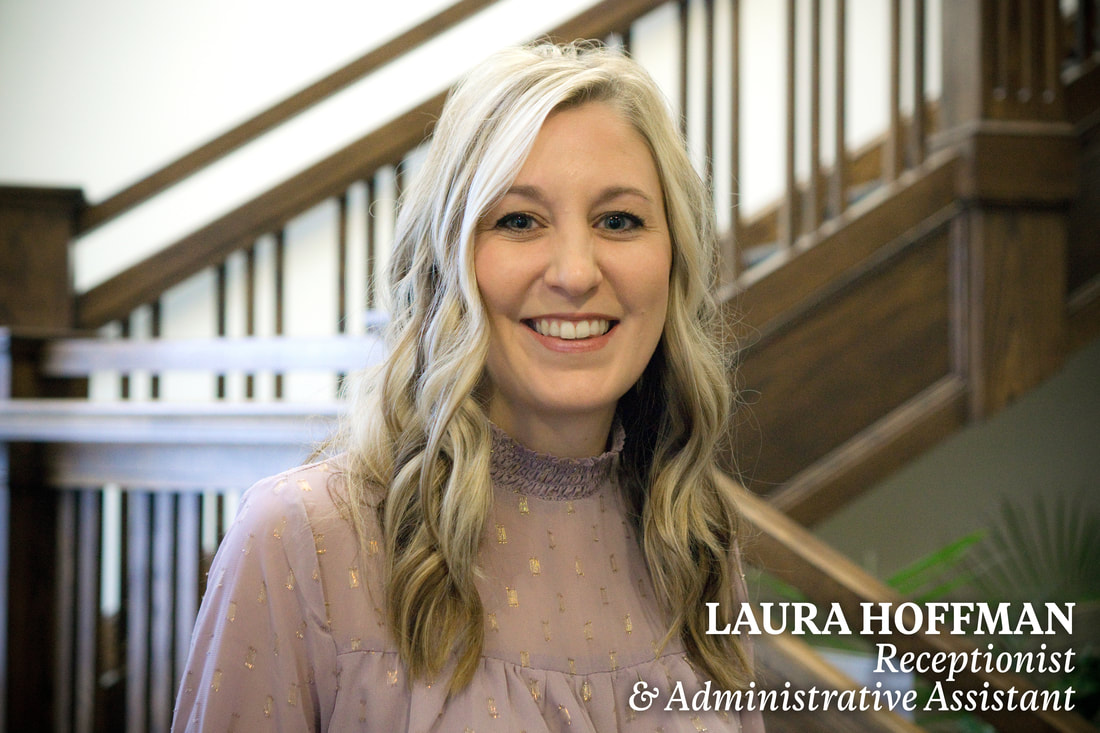 Laura is a welcoming presence for both members and neighbors.  She is delighted to answer questions about Trinity English’s programs, special events, and volunteer opportunities.  She is also a licensed Cosmetologist.  In her spare time Laura enjoys decorating her home and crafting, spending time with her family, antique shopping, traveling, and visiting new places. 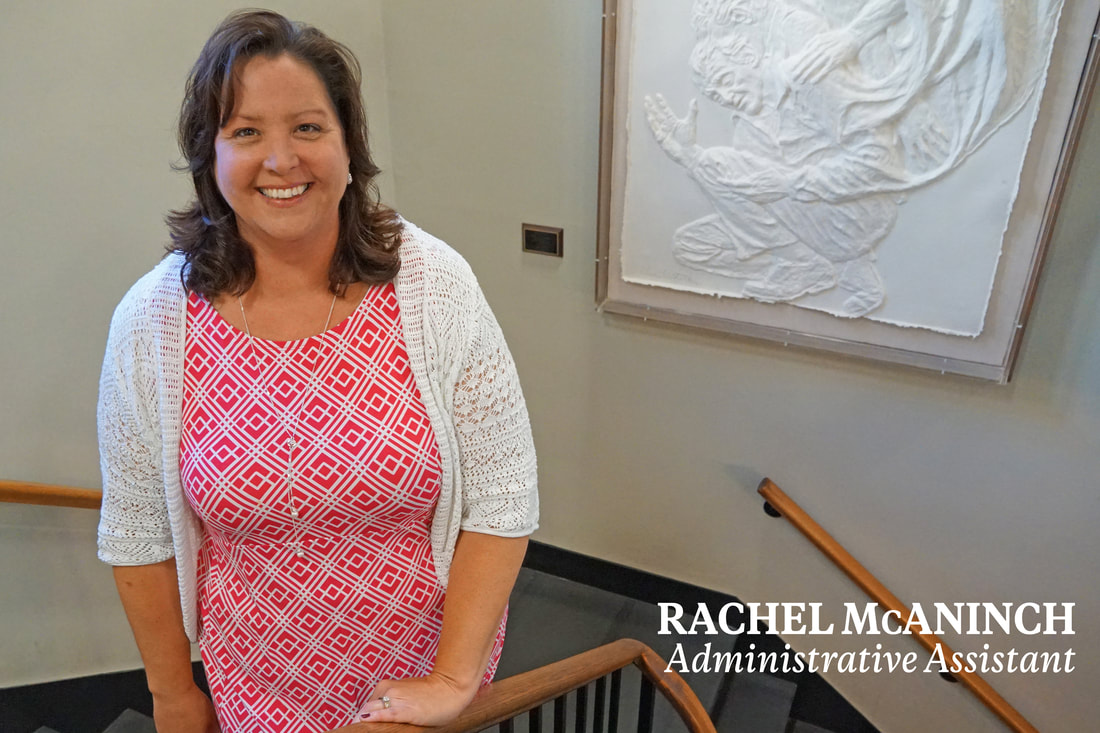 Rachel grew up in Kendallville, but calls Auburn Indiana her home. She studied Interior Design at Ball State University and Indiana Purdue Fort Wayne. Ironically, she has always worked in Finance and Administration! Previous employers include WANE-TV and the Fort Wayne Zoological Society. She joined TELC in August 2019 as an Administrative Assistant. Rachel is married to her husband Mark and has 2 children, Katherine and Aidan. She loves spending time with her family and friends, traveling, decorating and DIY. Huge hockey fans, they support the hometown team and are season ticket holders to the Fort Wayne Komets. CONTACT: EDAFFORN@TRINITYENGLISH.ORG
Elizabeth is a life long resident of Fort Wayne and has been a member of Trinity English for 38 years. She has her Bachelor of Science and Master Degree in Education from Indiana Purdue Fort Wayne. She taught for Fort Wayne Community Schools for 34 years; 24 of those years was teaching Kindergarten. Elizabeth retired from FWCS in June of 2019. She and her husband Bruce have 3 Children. They enjoy visiting their son in California, their daughter in Chicago and their other daughter lives here in Fort Wayne. Elizabeth enjoys reading, walking and spending time with family and friends. Her and Bruce are looking forward to spending more time traveling.